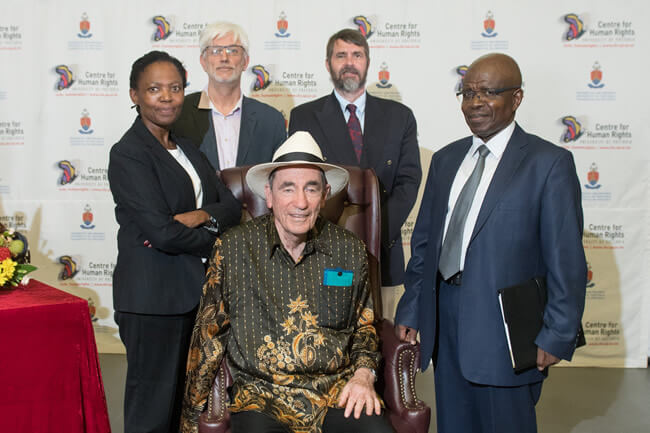 24 February 2017 – Through his activism over the decades, lawyer, revolutionary and politician – Oliver Reginald Tambo – left a lasting impression on South Africa and its Constitution. In celebration of his legacy, the Centre for Human Rights, Faculty of Law, University of Pretoria together with the Oliver & Adelaide Tambo Foundation, hosted the first in a series of Oliver Tambo Centenary Lectures on Wednesday 22 February 2017.

The event brought together students, academics and members of civil society to pay homage to Tambo’s life. Attendees were welcomed by the University’s Chancellor, Professor Wiseman Nkuhlu. Former Mayor of Ekhuruleni, Duma Nkosi – who played an instrumental role in the official renaming Johannesburg International Airport in Tambo’s honour – was also present.

Presenting the lecture, retired judge of the Constitutional Court and Tambo’s comrade-in-exile, Albie Sachs, reflected on the former ANC President’s values, integrity and relevance in the new constitutional order.

‘He was a ‘natural diplomat,’ Sachs recalled, ‘he never ran away from hard and testing questions.’ To illustrate this, Sachs challenged his audience to answer three questions centred around the Constitution and the inspiration behind it.

The first question Sachs posed was to name one good thing about apartheid. The audience was puzzled. “The one good thing about apartheid…” he jokingly remarked “was that it created anti-Apartheid…” In a sense, he suggested, it was only through the divisions of racial segregation, that the path of Tambo – born and raised in rural Transkei – could cross with that of Sachs – who grew up on the sandy beaches of Cape Town.

The freedom fighter’s second question delved into more controversial territory. He asked the crowd, “If you were to do a paternity test of the South African Constitution, who’s DNA would you discover?” He responded by dismissing the allegations that the constitutional project was an uneasy compromise, aimed at placating the black majority, while protecting the financial interests of the white minority. Instead, he rebutted, the Constitution was a power sharing mechanism, one that Tambo’s ideals proved instrumental in inspiring.

Finally, he asked “What did we fight for?”

He gave a simple answer: democracy. “Long before the Berlin Wall fell, the ANC supported multiparty democracy,” Sachs said. “I know it seems obvious now, but back then it wasn’t.” Here, he made an important comparison between the ANC and other political organisations on the continent. As neighbouring liberation movements descended into despotism and cruelty, the ANC, under Tambo’s guidance, managed to stay true to its egalitarian principles.

Comrade OR, as Sachs affectionately called him, shepherded the African National Congress through long years of uncertainty and homesickness in exile. During his fifty years in the organisation, he was a role player of every key area within the party. He was both a founding member and secretary of the ANC Youth League in 1944; general secretary of the ANC from 1952; leader of the ANC’s Mission in Exile 1960; ANC President between 1977 and 1990; then National Chairperson until his death in 1993.

In the later years of democracy, Tambo’s role has been overshadowed by louder, more populist voices in South African politics. In response to this, Sachs left the audience with an impassioned defence of the country’s founding document, remarking that “we have constitutions because we mistrust not only the enemy, but also ourselves.”

The first lecture in the Oliver Tambo Centenary Lecture Series was made possible by the generous support of the Royal Norwegian Embassy in South Africa.