Communities benefit from OR Tambo projects 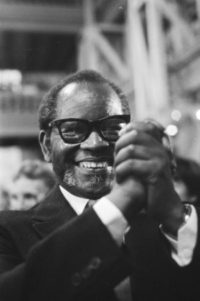 Posted at 16:00h in Articles, News by OATF
JOHANNESBURG -The provincial Department of Human Settlements has rolled out a housing project of 1 000 houses, with 500 of those houses completed in Nkantolo where the longest-serving ANC President OR Tambo was born.
Minister in the Presidency for Planning, Monitoring and Evaluation, Jeff Radebe, on Friday gave a briefing on milestones reached on the road towards the celebration of OR Tambo’s birthday. Born on 27 October 1917, OR, as he was fondly known, would have turned 100 years this year. He, however, died on 24 April 1993 after suffering a stroke at the age of 75. Tambo died one year before the 1994 general election in which Nelson Mandela became President of South Africa.
Government has declared this year as ‘The Year of Oliver Reginald Tambo’. As the chair of the Inter-Ministerial Committee (IMC) on the OR Tambo centenary celebrations, Minister Radebe said throughout the year, the Eastern Cape government has worked very hard in its implementation of key OR Tambo legacy projects in the area of Mbizana and Nkantolo.
“Out of the remaining 500 houses for Silangwe village, 100 houses have been built, while construction of the remaining 400 houses will be completed by the end of the current financial year.
“[A total of] 1 000 households have been connected to date and the breakdown is as follows: 300 households for Empetsheni village, Ludeke 200, Qungebe 26, Jama village 224, KwaMpisi 250,” Minister Radebe said from the GCIS headquarters in Tshwane.
In addition, the provincial Department of Roads and Public Works has upgraded and completed a 13 kilometre stretch of road from Ludeke to Nkantolo.
“The construction of Ludeke dam has been completed. An amount of R100 million has been approved by the Department of Water and Sanitation for secondary bulk infrastructure and this will enable the water reticulation from the dam to benefit people in Alfred Nzo District Municipality and Mbizana Local Municipality and most importantly, Nkantolo village in Ward 04,” Minister Radebe said. The construction of Nkantolo Multi-Purpose Community Centre is currently underway and the projected completion timeline is 31 March 2018.
Processes are in place to accelerate the refurbishment of the OR Tambo garden of remembrance.
All systems go for the 27th
The national OR Tambo centenary celebration will be held on 27 October to mark his 100th birthday, if he were alive, at his birthplace in Nkantolo. “The atmosphere and the mood on the ground is jovial building up to the centenary day of 27 October 2017,” Minister Radebe said.
Approximately 20 000 members of the public are expected to attend. About 1 000 invited guests are expected to be in attendance, including Ministers, Deputy Ministers, Premiers, MECs, Mayors, councillors, traditional leaders and ambassadors.
“On the 27th of October, the Oliver and Adelaide Tambo Foundation will be hosting their Oliver Tambo Centenary Memorial Lecture. The event takes place at the University of the Witwatersrand’s Great Hall, and commences at 4pm with pre-event celebrations,” Minister Radebe said. The pre-event celebrations include performances by the Wits Choir, the Unity Secondary School Choir and Ladysmith Black Mambazo.
The lecture, which will be delivered by former President Thabo Mbeki, will commence at 6:30pm.
“Sunday, the 29th of October, sees a collaboration between the Tambo and Mbeki Foundations in the hosting of the Oliver Tambo and S.S. Mendi Centenary Commemoration,” Minister Radebe said. The centenary celebrations are being held under the theme ‘Life and Legacy of OR Tambo’ and are expected to run until December 2017.
“The Eastern Cape Provincial IMC [Inter-Ministerial Committee] — under the leadership of MEC for Sports, Recreation, Arts and Culture, Pemmy Majodina, with support from the hosting municipalities, stakeholders and other key partners — has been hard at work and leading the countdown awareness activities,” Minister Radebe said.
These activities include various awareness programmes and activations at taxi ranks, malls, multimedia campaigns, social media campaigns as well as face-to-face interactions with the people of Mbizana.