Celebrating the Life and Legacy of O.R. Tambo

The year 2017 marks the Centenary of the late Oliver Reginald Tambo, who was one of the key drivers of South Africa’s liberation and one of the founding fathers of our constitutional democracy. Described by former President Nelson Mandela as “A great giant that strode the globe like a colossus”, O.R. Tambo served as President of the African National Congress (ANC) from 1969 to 1991, making him the longest serving President of the party. O.R. was a solution-oriented leader whose mission was to attain liberation for South Africa, and other nations alike, during his 50-odd years of political activism in the ANC. Born on the 27th of October 1917, the Foundation’s Centenary celebrations seek to remember his life, the values he espoused, and his commitment to the anti-apartheid movement, both during his time in South Africa and during his years in exile.

Directed by Connie Field, the 8thinstalment of the Have You Heard from Johannesburg documentary series was released in December 2017. Titled “Oliver Tambo”, the film explores O.R.’s life. The eighth instalment of the Have You Heard from Johannesburg documentary films, “Oliver Tambo”, is an intimate and personal look at the life of O.R., including rarely seen footage of him in action. The film not only shows the politics of the man, but also shines a light on a life lived with principles and ethics, and values such as compassion, inclusion, social justice and equality.

To celebrate Oliver Reginald Tambo’s 100th birthday, the Oliver & Adelaide Tambo Foundation held the Oliver Tambo Centenary Lecture at the University of the Witswatersrand’s Great Hall on the 27th October 2017. More than just a lecture, the event was a celebration of the life and legacy of Oliver Tambo 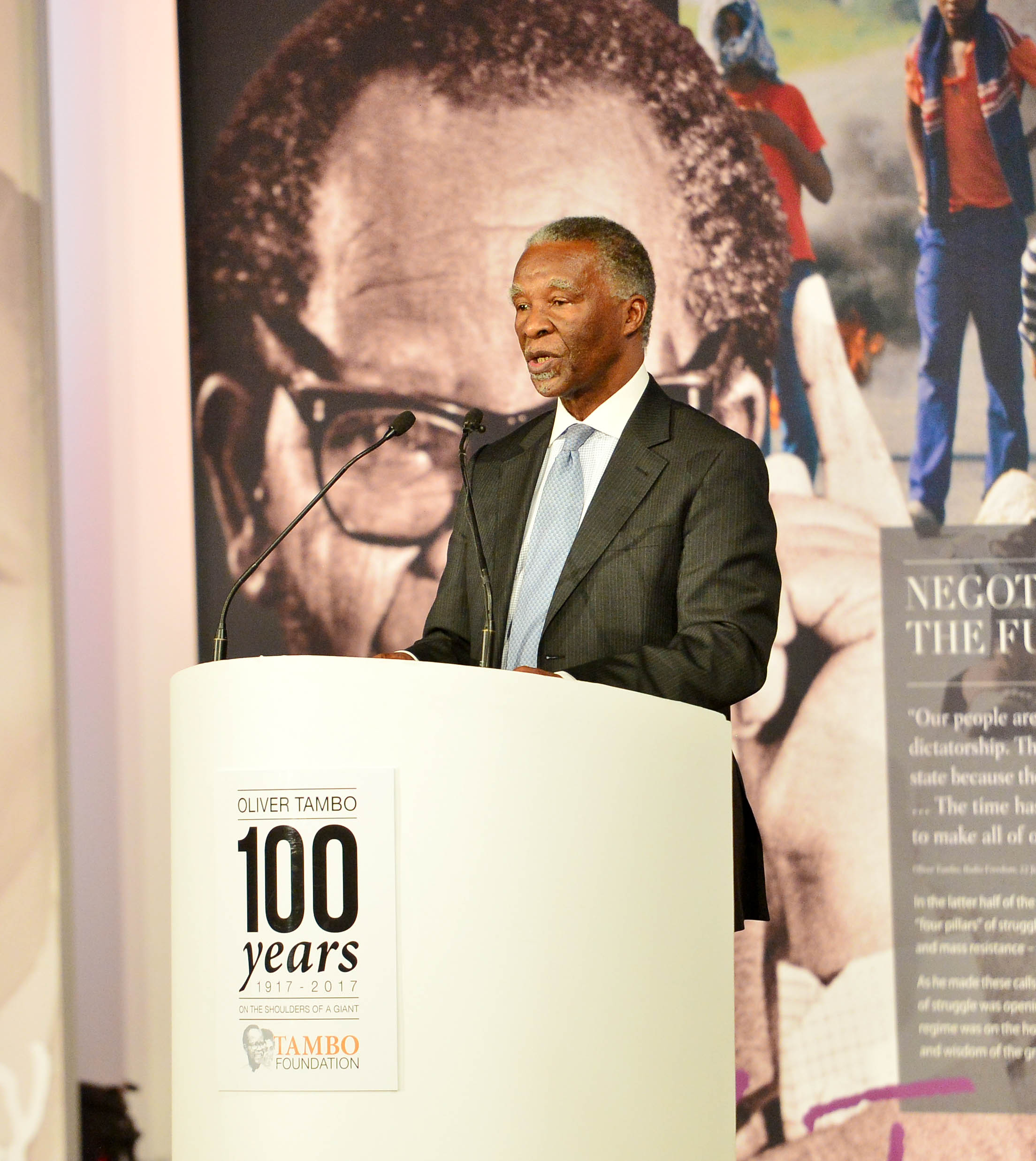 As part of the celebration of Oliver Tambo’s centenary, the Oliver & Adelaide Tambo Foundation, together with the Thabo Mbeki Foundation held the Oliver Reginald Tambo and S.S Mendi commemoration on the 29th October 2017 at the Regina Mundi church. In line with OR’s love for choral music, the event was a musical celebration by various choirs.

Power Fm 98.7 hosted the O.R Tambo dialogue to answer questions on OR’s legacy and the current situation in South Africa. In the discussions OR’s legacy was highlighted but the hot topic was the evaluation of where the country is currently headed. 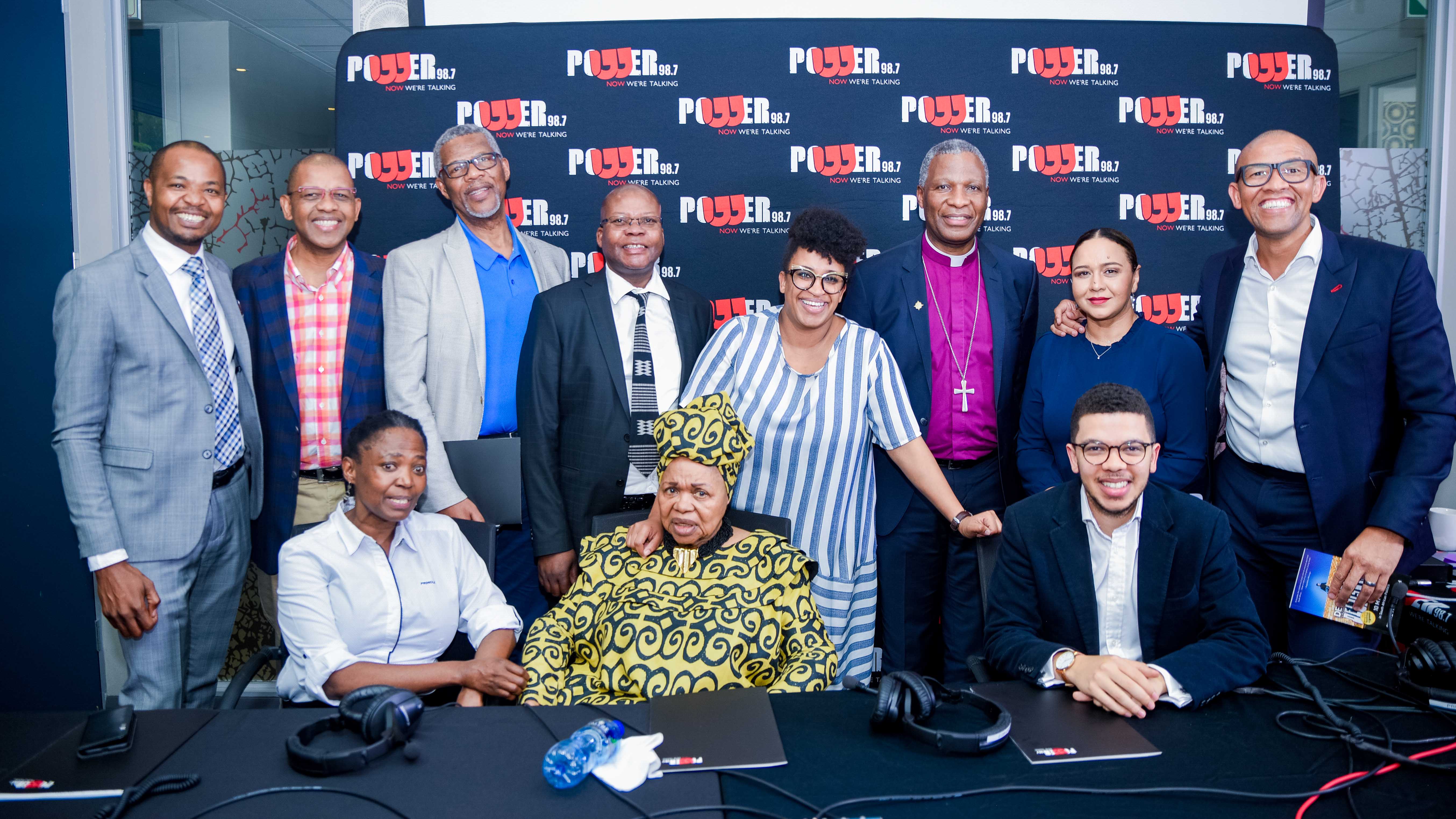 The University of Fort Hare hosted a heart-warming memorial lecture of the great leader comrade Oliver Tambo, the renowned hero of South Africa. The university together with Mr Pallo Jordan salutes the sharp and intellectual comrade Tambo for being one of the brave men who fought for the liberation of South Africa. 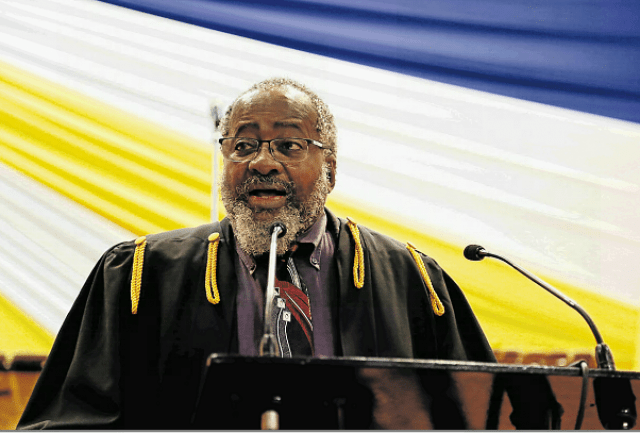 To celebrate Women’s month and Oliver Tambo’s championing of women’s rights, the Oliver & Adelaide Tambo Foundation, with support from the Department of Science and Technology, Rosa Luxemburg Stiftung and the Thabo Mbeki Foundation hosted a cross-generational Women’s month dialogue, addressing issues faced by women today and in Oliver Tambo’s time.

Opening of the Oliver Reginald Tambo: The Modest Revolutionary 1917 – 1993 exhibition

As part of the celebrations of what would have been Oliver Tambo’s 100th year, had he lived, the “Oliver Reginald Tambo: The Modest Revolutionary 1917 – 1993” exhibition opened at the Apartheid Museum on the 23rd August 2017. The event was opened with a song from Unity Secondary School choir.

Opening of the Oliver Reginald Tambo: The Modest Revolutionary 1917 – 1993 exhibition 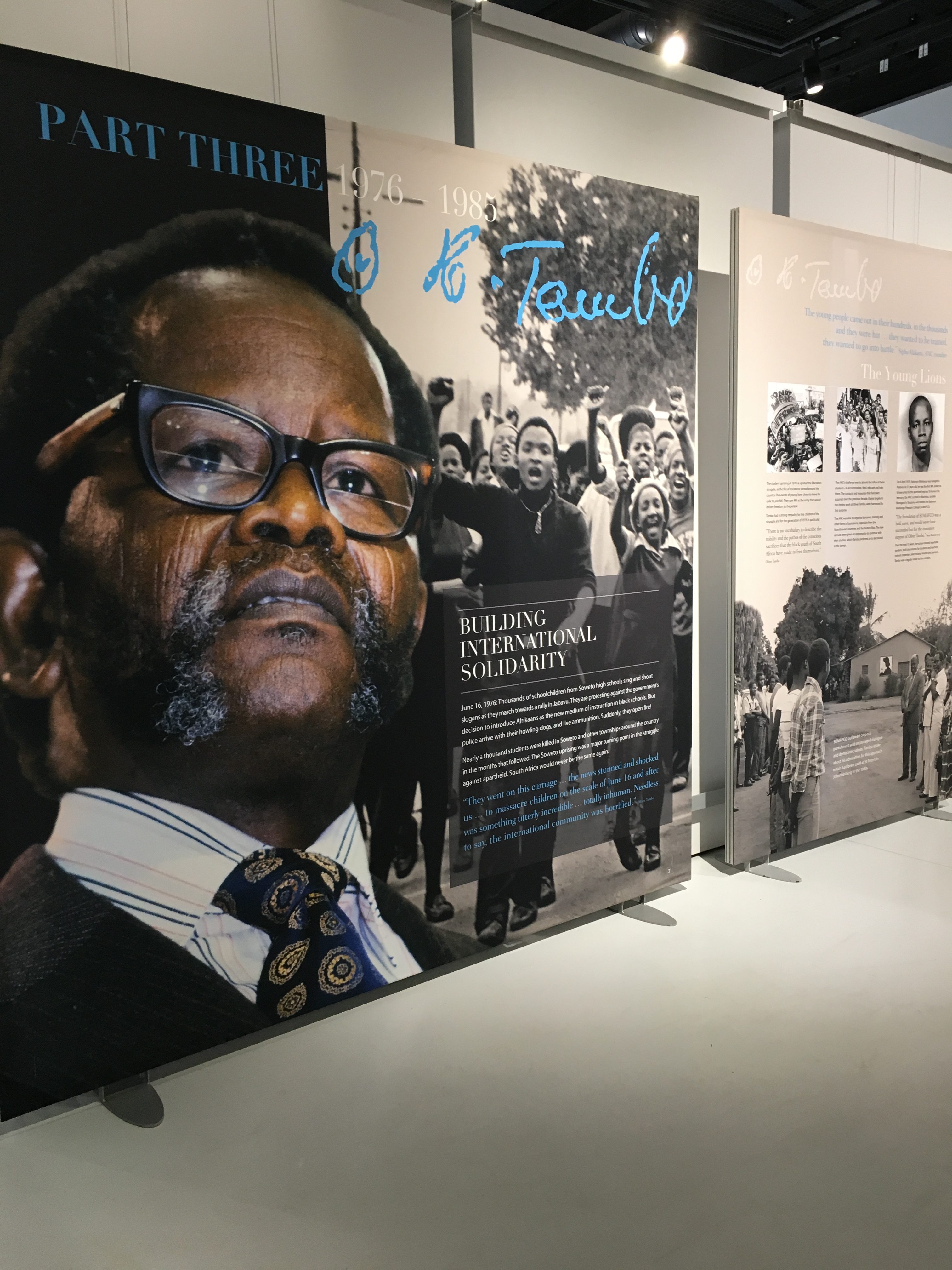 The gentlemen spoke of their fondest memories of their leader on what inspiration, leadership and lessons learnt from O.R and what they would have wanted to tell Oliver Tambo had he been alive today

Tambo And Mandela in Conversation

Tambo and Mandela had a unique relationship that started when they first met at the University of Fort Hare, and continued throughout their lives until Tambo’s passing in 1993. Theirs was a strong bond that saw them rise to be international leaders, showcasing selflessness, humility and collaboration beyond life’s challenges. They managed to stay friends and comrades even when they were separated with Mandela being incarcerated on Robben Island for 27 years, and Tambo in exile for 30 years. Their life story demonstrates true friendship and exemplary leadership, sealed by shared values for justice and human rights.

Tambo And Mandela in Conversation

In South Africa many girls miss out on around 25% of learning every month because they do not have any access to or money for sanitary towels. With these statistics in mind and the impact it has girl’s education the Oliver and Adelaide Tambo Foundation has set out on a mission to deliver sanitary pads to three schools. 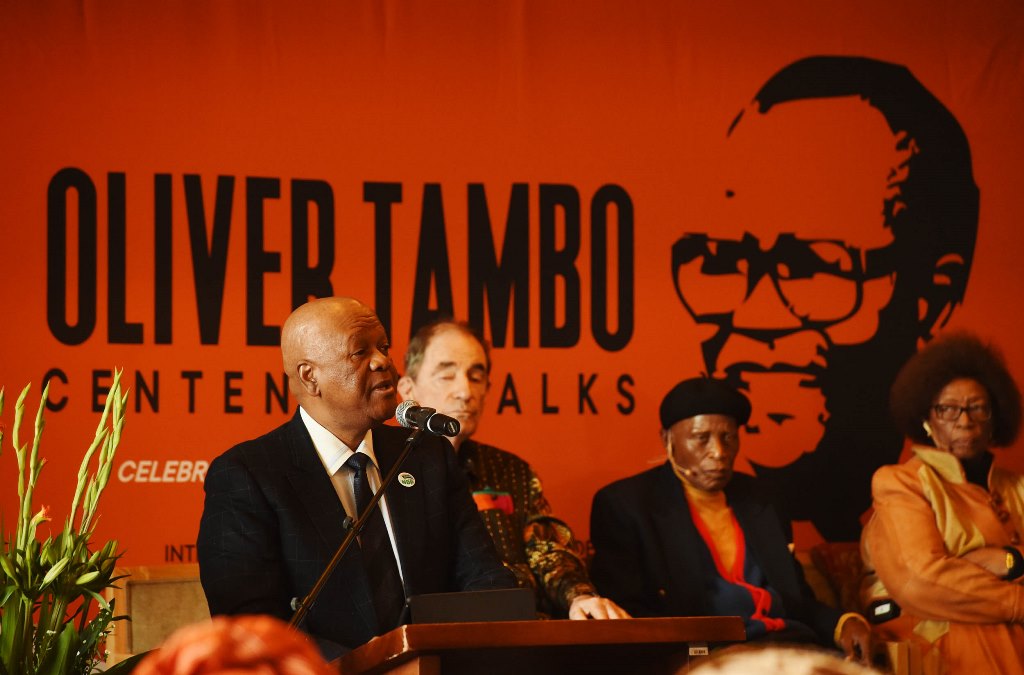 South Africans should work together in developing a truly liberated, non-racial, united and equal society, says Minister in the Presidency responsible for Planning, Monitoring and Evaluation Jeff Radebe.

The Foundation together with the South African National Roads Agency (SANRAL), the Mail & Guardian, Kaya fm, and the Wits School of Governance, hosted the Critical Thinking Forum on the 16 th May 2017. The topic: “Leadership Lessons Learnt from OR Tambo”. The event was facilitated by John Perlman, and for the first hour, was broadcast live on Kaya FM. 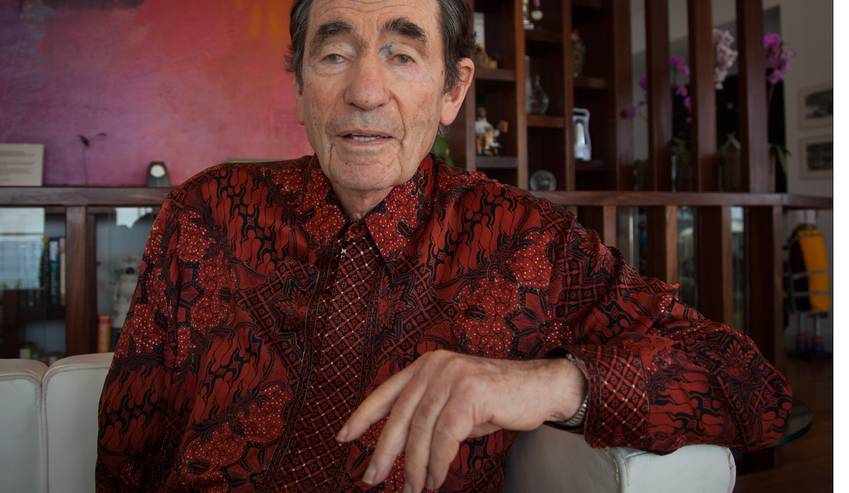 An Evening of Recollections and Reflections

As part of the celebration of Oliver Tambo’s centenary, the Oliver and Adelaide Tambo Foundation together with the British High Commission and the Trevor Huddleston memorial centre held an evening of recollection and reflection on the life of Oliver Tambo on the 22nd March 2017.

An Evening of Recollections and Reflections

As this is the Centenary year of Oliver Tambo, the Foundation has partnered with the University of Pretoria’s Human Rights Centre to host a series of lectures, commemorating and reflecting on the various facets of Oliver Tambo, as well as the impact he has had on South Africa and world. The partnership will result in a four-part lecture series.

The first lecture in this series was delivered by Justice Albie Sachs on the 22nd of February  2017.

The second lecture was delivered by retired Deputy Chief Justice of the Republic of South Africa, Justice Dikgang Moseneke.

On the 11th of February the Department of International Relations and Cooperation (DIRCO) held their annual Ubuntu Awards at the CTICC in honour of O.R.’s Centenary.  DIRCO dedicated their entire ceremony to the legacy of Oliver Reginald Tambo. The O.R. Tambo Lifetime Achievement Award for 2017 was awarded to Ma Gertrude Shope.

The British High commissioner, Dame Judith Macgregor, held their annual Eve of Parliament Reception on the 8th of February, at her residence in Cape Town. This year, she made special mention of the relationship between England and Oliver Tambo in the fight against apartheid. The Tambos were in exile in London, in Muswell hill, for 30 years.