The story of Adelaide Frances Tambo 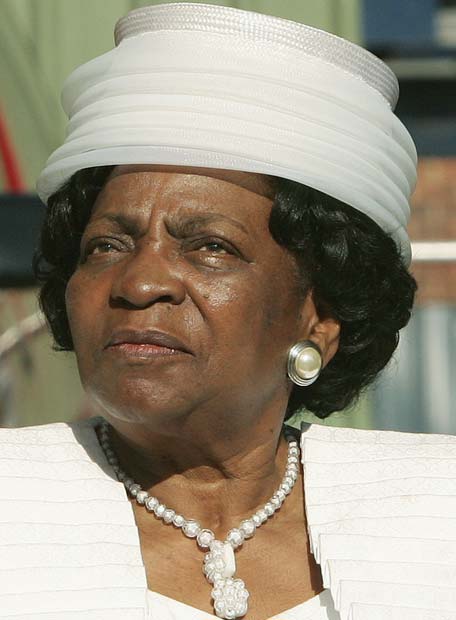 We used to have a song that says in Xhosa, I'll not refuse if I'm asked to perform a task.

Adelaide Frances Tambo (nee Tshukudu) was born on 18 July 1929 in Top Location, Vereeniging, in the Vaal Triangle. Tambo attended the St Thomas Practising School in Johannesburg and Orlando High. She worked as a nurse at the Pretoria General Hospital and at an old people’s home in London.

Adelaide Tambo’s political life started at the age of 10 after a raid by the police, following a riot in Top Location, Vereeniging. A police officer had been killed, and Adelaide’s ailing grandfather, aged 82, was among those who were arrested and taken to the town square. There the old man collapsed and Adelaide had to sit with him until he regained consciousness. The way the young policemen pushed him around and called him ‘boy’ made her swear to fight them till the end. This was in 1939 and at the time she was a primary school pupil at St Thomas Practising School in Johannesburg. In 1944, she started working for the ANC as a courier, while studying at Orlando High. She had joined the school’s debating society and, as it was during this time that Dr Malan was entrenching apartheid, it became a heated subject for most of the students.

At 18, Tambo joined the ANC Youth League and was elected chairperson of the George Goch branch. One of her duties was to open branches of the Youth League in the Transvaal. Later, as a student nurse at Pretoria General Hospital, she started a branch with the help of people like Sheila Musi, Mildred Kuzwayo and Nonhle Zokwe. She met Oliver Tambo at a meeting of the Eastern township branch of the ANC and the two were married in December 1956, during the Treason Trial. They were aware that both were likely to be arrested sometime and so discussed their political involvement as well as having children. They decided that one would have to do full-time political work and the other would have to work part time and take full charge of all family matters, including giving support to the old people of both families.

Oliver and Adelaide Tambo were asked by the ANC to leave the country in 1960 and to carry on the work of the organisation outside South Africa once they were settled. Adelaide resumed her work as a courier – this time for her husband. Based in London until the unbanning of all political parties, Adelaide became a founder member of the Afro-Asian Solidarity Movement and the Pan-African Women’s Organisation (PAWO). She also assisted in identifying and financially assisting some of the families whose children left South Africa after the 1976 uprisings. In 1994 she was elected to represent the ANC in Parliament, but preferred not to serve a second five year term.

Besides her work as the national Treasurer of the ANC Women’s League, Adelaide also occupied herself with community work, caring especially about elderly people in old age homes. She launched the Adelaide Tambo Trust for the Elderly and was honorary life patron of the Cape Town City Ballet.

Her contribution to the liberation struggle and commitment to community projects earned her several awards, namely, the Noel Foundation Life Award for initiating the anti-apartheid movement in Britain; the first Oliver Tambo/Johnny Makatini freedom award in February 1995; the Order of Simon of Cyrene in July 1997, the highest order given by the Anglican Church for distinguished service by lay people; and, in 2002, the Order of the Baobab in Gold.

Ma Tambo, as she was affectionately known, passed away on 31 January 2007 night at her Hyde Park home, in Johannesburg, at the age of 77. The cause of her death was not immediately determined. Her memorial service was held on Sunday 5 February 2007 at the Johannesburg City Hall. The service was attended by eminent people from government and private sectors. She was given a state funeral on Saturday 10 February 2007.

Thousands of people, including government ministers, diplomats and clergy, attended her funeral service, which was held at a stadium in Wattville. Ma Tambo was buried next to her husband Oliver Tambo in the Tamboville cemetery, named in their honour.  Kenneth Kaunda, former Zambian president, was amongst the mourners. She is survived by three Children, Dali, Tembi, Tselane, and several grandchildren.