Dikgang Moseneke: ‘Anyone Who Calls Winnie A Monster Is Talking Nonsense. She Was Wonderful.’

05 Apr Dikgang Moseneke: ‘Anyone Who Calls Winnie A Monster Is Talking Nonsense. She Was Wonderful.’

The former deputy chief justice says the hype around Madikizela-Mandela’s kidnapping conviction did not accurately reflect what she was accused of. 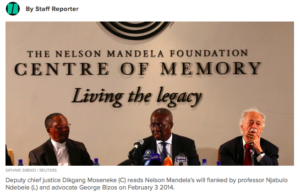 Former deputy chief justice Dikgang Moseneke, once part of the legal team who defended Winnie Madikizela-Mandela when she was tried for the kidnapping of four boys in 1991, has described Winnie Madikizela-Mandela as an “absolute heroine”. In an interview with Business Day on Tuesday night, Moseneke described her as “near to fearless” during her trial, and someone who suffered “pain that is not immediately describable”.

She had an “incredible ability to be able to take on injustice and soak up pain in a way that is not immediately describable”, he reportedly said.

“I have unadulterated praise for her, in bringing us to where we are. I think she deserves credit for that. I certainly hope she gets it,” he said.

Madikizela-Mandela’s bodyguard, Jerry Richardson, was eventually convicted of the murder of one of the four kidnapped boys, Stompie Seipei, but allegations of her involvement have clung to the struggle icon ever since.

She was convicted of kidnapping, and her six year sentence was replaced with a fine and a suspended sentence on appeal.

But the “hype” surrounding the case was not proportionate to what Madikizela-Mandela was actually convicted of, Moseneke told Business Day.

“There were no findings of murder against her, and there were no findings that she assaulted Stompie in any way. Did she move the young people from where they were? Yes. Did she believe they might have been abused? That was her subjective belief, and that is why she acted the way she did. Was every decision she made wise? No, not every one,” he said.

“Anyone who calls her a monster is talking rubbish. She was wonderful.”

Madikizela-Mandela will be buried at the same cemetery as her great-granddaughter, Zenani Mandela, News24 reported, at the Fourways Memorial Park near Sandton. Zenanie was reportedly buried here in 2010 after being killed in a car accident. She was leaving the 2010 Soccer World Cup kick-off concert in Soweto.

Madikizela-Mandela was reportedly so devastated by the news that she was taken to hospital and treated for shock.

Her funeral will be held in Johannesburg, a family spokesperson told News24.

In an interview with HuffPost SA last year, Madikizela-Mandela also denied any involvement in Seipei’s death.