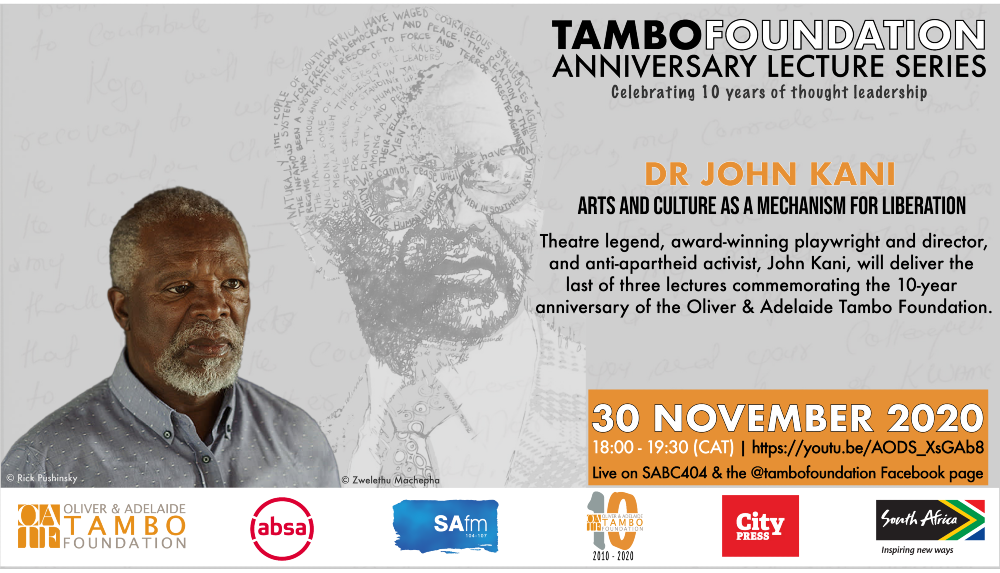 Topic: Arts and Culture as a Mechanism for Liberation

With arts and culture in dire straits during the COVID-19 pandemic, and South Africans desperately needing to understand the important role they play in shaping society and fighting oppression, who better to talk to this topic than legendary South African, Dr John Kani?

Theatre legend, director, playwright and a cultural activist, Dr John Kani, delivered the final instalment of the 10-Year Anniversary Lecture Series in which he discussed the effective use of arts and culture as a tool for liberation, both in Oliver Tambo’s time, as well as in present day South Africa. We wanted to encourage our audience to ponder the role of arts and culture in promoting humanity, unity and social cohesion and how they can more effectively be employed in future to positively impact our individual and national growth.

He spoke passionately about the legacy of Oliver Tambo and how he encouraged young artists to tell the story of South Africa’s struggle. Dr Kani spoke about how music was used as a conduit to learn about leaders of the struggle and the trials in which they were involved. In a quote that echoed across both Twitter and Facebook, Dr Kani explained “We realised we have a special role as artists – the ability to tell a story, create a picture of the reality of SA. We understood that our role is critical within our own community. The artists held a mirror through which the community must see themselves.”

In the era post-apartheid, Dr Kani explained how the arts were used to give information and education about the democratic elections and give hope to citizens. Finally, he turned to present-day South Africa, and emphasised the role of the arts as being the government’s watchdog and how it is now more important than ever for artists to come out now to deal with racism and gender-based violence; how art could be used as the fuel to the flame of humanity and the recognition of each other as human beings.