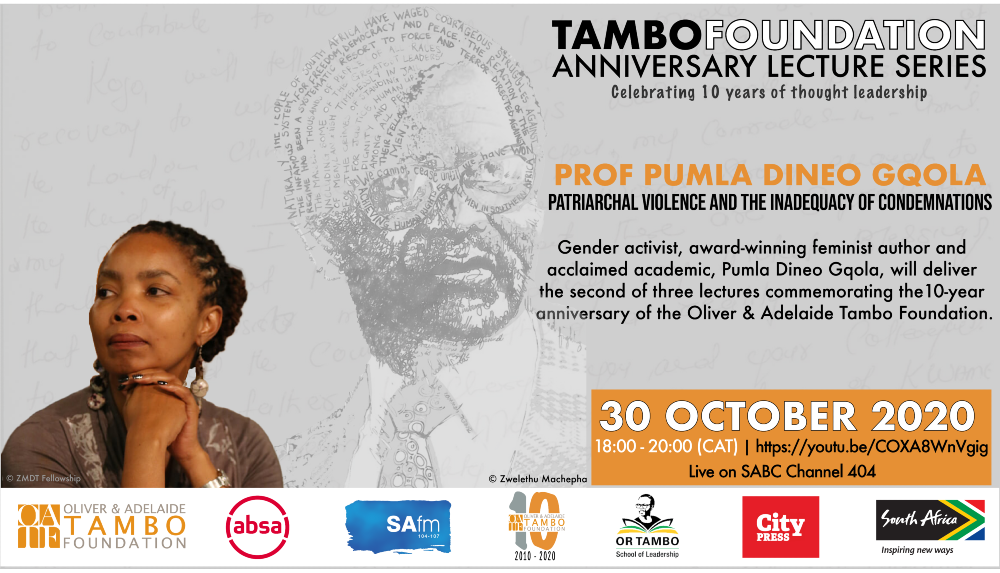 Topic: Patriarchal Violence and the Inadequacy of Condemnations

Gqola represents a marginalised and massive segment of our population – women. The inclusion of Prof Gqola in the series was to highlight the feminist beliefs to which both Adelaide and Oliver Tambo subscribed. In 2018, the Foundation identified gender parity as one our core themes and has been actively hosting dialogues that address the myriad of issues women are currently facing in South Africa since. Given that Ma Tambo, as she was affectionately known, was a founding member of the Pan African Women’s Organisation and a fierce feminist, we felt that this was a crucial addition to our programmes, that would serve to help us implement our mandate of promoting, preserving and protecting the legacies of both our honourees.

Professor Gqola’s lecture was powerful and eye-opening. In it she expanded on her theory from her book “Rape: A South African Nightmare” of the female fear factory which argues that the daily microaggressions against women are, in fact, a coordinated attempt by a patriarchal system to keep women in constant fear, which in turn prevents them from accessing equal opportunities – social or economic. The fear of the ordinary – walking to work, getting into a taxi, going out for dinner after work – all of these simple tasks require women to negotiate their safety due to a very real and constant threat of violence.