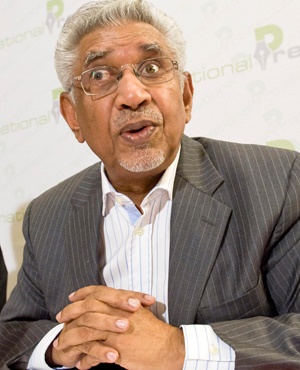 Posted at 16:06h in News by OATF
Johannesburg – Former African National Congress leaders Nelson Mandela and Oliver Tambo were men of great humility and leadership, taking full responsibility for their actions, Mac Maharaj has said.”Leadership arises in the way in which you react to the unintended consequences,” said the ANC stalwart and former spokesperson for President Jacob Zuma.Maharaj was leading a panel discussion at the Wits School of Governance in Parktown, Johannesburg, on Tuesday evening, and was reminiscing about the lives of the two political giants.The discussion was titled Tambo and Mandela in conversation. Panellists included Maharaj, Lindiwe Mabuza, a poet and diplomat, and Luli Callinicos, an author who also wrote Tambo’s biography. It was moderated by veteran journalist Iman Rappetti.

The enthralling dialogue, which took the form of a vibrant conversation with audience members, paid tribute to the “the powerful friendship and partnership between Mandela and Tambo, which shaped the course of South Africa’s democracy”.

The charismatic Maharaj – who was imprisoned on Robben Island prison along with Mandela – didn’t mince his words, saying that real leaders turned setbacks into an opportunities, and that they pointed the way forward instead of seeking to blame others when things went wrong.

He said both men had shown leadership, including a time when Mandela – after a year in prison – was brought to trial and took full responsibility for the actions of Umkhonto we Sizwe.

Maharaj told the packed room that, at the time, Mandela was facing the possibility of a death sentence, but took responsibility even though he was not there when the armed wing came up with the plan for “Operation Mayibuye”.

Operation Mayibuye was a military plan devised in the 1960s to overthrow the apartheid government.

Maharaj said Tambo’s strength was his thoughtfulness and ability to think precisely.

He said Tambo had appointed a subcommittee in 1984 to consider whether negotiations were feasible, to avoid being caught off guard.

At the time, most frontline states had already started urging those in the movement to start negotiating with the apartheid government.

The frontline states were a coalition of African countries (Angola, Botswana, Lesotho, Malawi, Mozambique, Swaziland, Tanzania, Zambia and Zimbabwe) which were committed to help defeat apartheid.

In 1984 – in a setback for the ANC – the Nkomati Accord was signed between Mozambique and South Africa.

Maharaj said taking responsibility and being held accountable when things go wrong made a leader, saying it set the moral high ground for others to come forward.

Maharaj said the type of collective responsibility taken back then by both leaders was not akin to the type we see from current leaders.

“Collective responsibility doesn’t absolve you as an individual in that collective,” he said to audience applause.

He said that good leadership drew in other formations in civil society and listened to everyone.

“Whether those people are ANC or not, it is the duty of the leader of the revolution – if he is a leader – to take into account all those voices, because when the party goes to sell its policies, it will have to sell it to the people,” he said.

The two struggle stalwarts met in their early years at the University of Fort Hare as student activists, and they remained friends until Tambo died in 1993.

Callinicos said what set Tambo apart from other leaders was his insistence on collective decision making.

“Madiba was the more authoritative figure, whereas OR was always last to speak, making sure everyone had expressed themselves before speaking himself,” said Callinicos, adding that Tambo was a great teacher.

The same sentiment was echoed by Mabuza, who described him as a principled man with integrity, who was very truthful. She said that he always listened, and that being a spiritual man meant that he was ethical and morally upright.

“As we idolise, we must also take into consideration that there were flaws in them. Mandela had the regret of unwittingly giving the impression that he’s a saint, and he never was one,” said Sello Hatang of the Nelson Mandela Foundation.

Mabuza said Tambo – who she called “bhuti” instead of president – was warm, embracing and talked to children like a father. Many children affectionately called him “uncle” and respected him because their parents respected him.