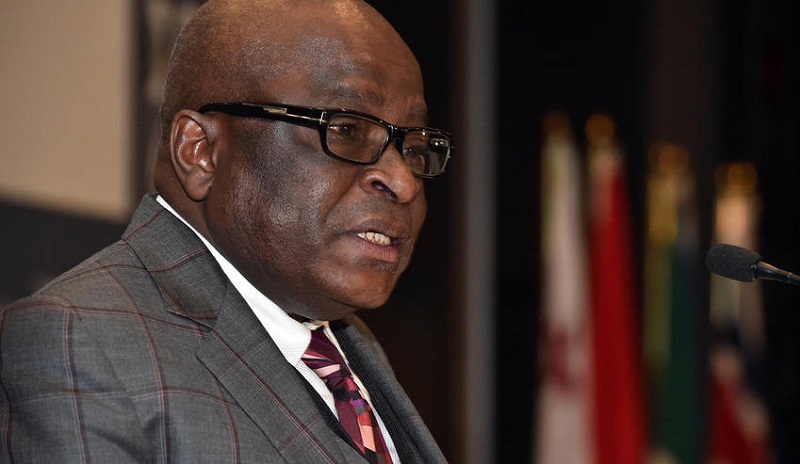 Ramatlhodi was the ANC president’s speechwriter. He recalls a sharp dresser who was meticulous in his attention to detail and unwaveringly dedicated to liberation.

The late struggle stalwart Oliver Reginald Tambo was a perfectionist – he was so thorough and meticulous that in the late 1980s and early 1990s, he would make his speechwriters rewrite drafts until he was satisfied.

In some instances, he would end up only reading the opening paragraphs of the speech and deliver the remainder of his address off-the-cuff.

Before the era of computers, former public service and administration minister advocate Ngoako Ramatlhodi, who was a youth activist in his thirties at the time, was appointed speechwriter to the then exiled ANC president at a time when political parties were banned.

Between 1987 and 1993 – during which time Tambo’s health took its toll following a stroke in the mid-1980s – Ramatlhodi, who had gained much political insight through his work in youth structures in exile, grew close to Tambo.

The president was navigating sensitive political terrain while South Africa was on a knife’s edge and was on the verge of opening negotiations that would dismantle the apartheid regime.

In an interview Ramatlhodi said that looking back on that period, writing for a selfless, great struggle stalwart such as Tambo was at times challenging and in some instances, very insightful.

The advocate was part of a committee in the Presidency with veteran struggle stalwarts Jack Simons, Edwin Mabitse (real name Edward Mabitsela) and the first Speaker of the democratic parliament Frene Ginwala, who was based in London.

“The two of us [Ramatlhodi and Mabitse] were made the president’s speech writers and secretaries and then we formed a committee in the Presidency with Jack Simons.

“[We] would be faced with typewriters on a daily basis and the old man was a perfectionist – he would mark us red – there were no computers in those days. So if it is marked red, that means you are going to start afresh on the typewriter all over again.

“But he would give us work quite ahead of time. Let’s say he was going to make a speech in May, he would then say a month before we should start drafting that speech, or a month and a half before. Then we kept on taking the drafts to him and he looks at them, asks you questions like ‘Do you understand what you are saying? Do you think the president of the ANC would say this like that?’

“Then he puts you back in line and says I think you should articulate this thing this way and this way. And you would go and do a rewrite,” he said.

In February, President Jacob Zuma declared 2017 the year of OR Tambo to recognise the struggle stalwart’s contribution to the liberation struggle. Ramatlhodi said Tambo was “a patriot” who cared about language.

“He knew the politics, he had the content… He was very passionate about the liberation of our people and even in hard times, when he [fell ill] before 1985, he had a stroke and then we went to this conference in… Zambia and there he said ‘My body is weak; it is limping. But what remains of it shall be consumed in the struggle.’

“He was definitely clear that he was going to fall with his boots on and I think that is what happened.”

The rise of OR Tambo

Born on 27 October 1917 in Kantilla, Bizana, in Mpondoland in the Eastern Cape, Tambo ran an attorney’s practice with Nelson Mandela in central Johannesburg in 1951 before Mandela was banned. This was after he joined the ANC in 1940.

In 1953, Tambo’s profile as an anti-apartheid activist rose and he replaced the then national secretary, Walter Sisulu, who had been banned by the government for his role in the 1952 Defiance Campaign. In 1957, Tambo was elected deputy president of the ANC.

Subsequent to the Sharpeville Massacre on 21 March 1960, Tambo embarked on a Mission in Exile to gain international support for the South African liberation movement. He became ANC president in 1969, a position he kept until 1991, making him the longest-serving president of the ANC.

In the late 1980s he recruited Ramatlhodi as his private secretary and speechwriter. At the time, Ramatlhodi was head of the ANC’s Regional Political and Military Council of the Zimbabwe Mission. He had spent time in Lesotho, where he was the student representative council (SRC) president at the National University of Lesotho. Former Reserve Bank governor Tito Mboweni was the secretary responsible for publicity in the same student body.

Usually, Ramatlhodi would travel to Angola for military training and return to Lesotho to continue his studies. But on one occasion, he was told to go to Lusaka in Zambia because he “was needed” there.

He was taken to the ANC’s headquarters in exile, where the liberation movement’s top officials were waiting for him, as was Mboweni.

Ramatlhodi and Mboweni were briefed about what has taking place in Lesotho. Times were tense: the South African Defence Force had massacred ANC members in Lesotho, Botswana and Mozambique.

Their appointment as envoys was mainly the result of the access they had to frontline leaders and ministers, including the prime minister of Lesotho at the time, through their SRC positions.

Ramatlhodi was later deported from Lesotho and was sent to Russia. There, he did military combat work and on his return to Africa, he was put in charge of the council in the Zimbabwe Mission, when the ANC was devising a strategy to start negotiations with the apartheid regime.

In 1987, he was appointed speechwriter to Tambo and formed part of the team that went on to draft the Harare Declaration.

Ramatlhodi said one of the most important documents he wrote under Tambo’s watch was the Constitutional Principles, which he co-drafted under the ANC Constitutional Committee to define a debate on the country’s new constitution.

“There are many, many documents that I wrote. For example, the Constitutional Principles of the region, which I participated in even when I was in Harare.”

He said this was one of the most important pieces of writing that he was part of as Tambo’s speechwriter.

“When we were drafting the Harare Declaration in 1989, we did a tour of the frontline seat – …Tanzania, Zimbabwe… for a week.

“What happened was we wrote a draft… and sent it to people in South Africa and the neighbouring states for their comment and then we followed up to engage with the authorities so that they made their inputs into the final outcome of that document.”

After the roadshow, they returned to Luanda in Angola to draft the final document before proceeding to Lusaka. In the group was former president Thabo Mbeki; ANC strategist and former head of policy and in the co-ordinating advisory unit in the Presidency Joel Netshitendzhe; intellectual and activist Pallo Jordan, former member of parliament and minister; and former justice minister Penuell Maduna.

Ramatlhodi said Tambo was of the opinion that the document underemphasised the role of the armed struggle in the liberation war. He instructed Ramatlhodi to return to the team and raise the view as his own.

“That’s Oliver Tambo for you. He did not want it to come from him because they would easily be persuaded because the president said so. So I had to go argue on that point on his behalf. So it illustrates the point that he was not self-imposing,” he said.

The stroke and the comeback speech

Tambo suffered a mild stroke in 1981; eight years later, on 9 August 1989, he suffered a more severe stroke in Lusaka and was rushed to London. During his recovery, Ramatlhodi was sent to the British capital to help him regain his speech, as Tambo was only comfortable with people familiar to him.

“Towards December that year the ANC was going to have a conference in South Africa, so I went back to help him regain his speech because he was comfortable with familiar surroundings.

“I showed him that speech on the machine manually. But the good thing about him – he was a fighter – by the time he returned [to South Africa], he was reading the speech. And he made many other speeches across the country subsequently,” said Ramatlhodi, who was 39 at the time.

This followed then state president FW de Klerk unbanning all anti-apartheid political parties in February 1990, paving the way for negotiations that would end apartheid.

Tambo delivered the speech on 16 December 1990 at a rally following the close of the ANC elective conference. It was at this gathering that Mandela was elected Tambo’s deputy president.

In his speech, Tambo said: “South Africa is at the crossroads. Our struggle, complemented by efforts of the international community, has rendered apartheid unworkable. Thus, those who rule us without our consent have been compelled to accept the humanity of a black person in this country. For the first time in a period of 70 years, the legitimate aspirations of the overwhelming majority of our people have possibilities of being realised.”

Tambo made several more speeches written by Ramatlhodi and at the ANC’s 48th National Conference in Durban in July 1991, he delivered what seemed to be a farewell speech in his opening address. He later told delegates of his intention to step down, urging them to support Mandela as his successor.

After he declined a nomination to be president again, delegates created the national chairperson position in honour of Tambo.

In the early hours of 24 April 1993, Tambo suffered his third and fatal stroke – two weeks after the assassination of Chris Hani, then leader of the SA Communist Party and Umkhonto we Sizwe chief of staff.

Ramatlhodi said while it was usually all hard work and putting pen to paper to craft speeches and document what would later become the liberation movement’s most-prized possessions, he remembered an ANC president who was a smart dresser.

“He loved his clothes. And he wanted us to dress very well. If you were shabbily dressed he would look at you and [ask] ‘Ngoako, don’t you have clothes?’

“I remember on one trip [during] the Harare Declaration, I don’t think I had enough suits with me. He called the late Stanley Mabizela and said ‘Take this man to town and buy him clothes.’ He gave him money. I got about three nice suits that day.

“If you were properly dressed he would take off his glasses and say: ‘You look so smart.’”

One of Ramatlhodi’s favourite phrases from the speeches he wrote was “United in our diversity”.

“That line comes from a paragraph in our speech where we say: ‘We seek to create a united, democratic and non-racial society. We have a vision of a South Africa in which black and white shall live and work together as equals in conditions of peace and prosperity.’ Tambo made this speech at Georgetown University in Washington, DC on 27 January 1987. At this time, South Africa was at the height of the armed struggle.”

Following his time as Tambo’s speechwriter, Ramatlhodi stayed on in the office of the Presidency when Mandela for about six months after Mandela took over. This was while Mandela, affectionately known as Madiba, embarked on a world tour as ANC president.

Would you like to use this article in your publication or on your website? See Using Brand South Africa material.