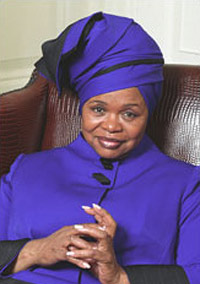 Lindiwe Mabuza was born in the coal-mining town of Newcastle, KwaZulu-Natal in 1938. After matriculation she enrolled at Roma University in Lesotho. In 1961 she moved to Swaziland, where she taught English and isiZulu literature. In 1964, Mabuza began graduate studies in English at Stanford University, California. In 1969 she became an assistant professor at Ohio University. She taught literature, history, studies of international racism and injustice for eight years.

Mabuza is a widely respected poet. She has had five volumes of poetry published around the world. Her publications include: Malibongwe, One Never Knows – poetry and short stories by African Congress Women; From ANC to Sweden, Letter to Letta, Africa to me, Voices that Lead – all poetry collections. To Quincy, is one of her longest poems that was published in Feminist Studies in 1995.

Mabuza joined the African National Congress (ANC) in 1975 and became a journalist for the ANC’s Radio Freedom, based in Lusaka. Her concern with women’s issues led to her involvement with Voice of the Women (VOW), the ANC’s feminist journal, which encouraged women to write poetry. The VOW gave its readers a forum in which to express themselves and their feelings and to tell the world about their lives. These stories were later published in a collection in 1980 under the title Malibongwe. She is the co-editor of Oliver Tambo Remembered, a tribute to one of South Africa’s greatest leaders.

Through her role as Chairperson of the ANC Cultural Committee from 1977 to 1979, Mabuza gave expression to her creative and artistic spirit. In an interview in 1995 she stated: “Poetry is part of the struggle. You use the armed struggle; you use political methods…. You recite a poem. It’s better than a three-hour speech. It gets to the heart of the matter. It moves people.”

Mabuza served as South African Ambassador to Germany, Malaysia, the Philippines and the United Kingdom. She was also a college-level educator, radio journalist, an editor, as well as a prolific poet and short-story writer. Almost all these callings pointed towards one goal, which was to abolish apartheid in South Africa.

Mabuza was instrumental in the creation of the ANC’s ensemble Amandla! She promoted the concept in Scandinavia. In 1986 she was moved to the United States of America, organising anti-apartheid boycotts and rallies, and putting pressure on major corporations to withdraw their investments and facilities from South Africa.

Throughout her life, Mabuza was a cultural activist. She received numerous awards, including an honorary doctorate degree from the University of Durban-Westville in 1993, and the Yari Yari Award for contributions to Human Rights and Literature from the New York University in 1997.