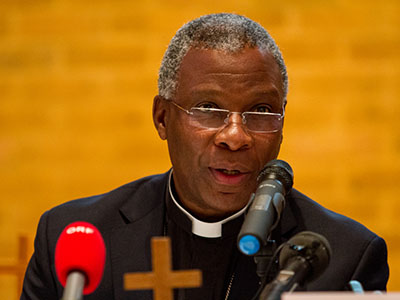 The Most Revd Dr Thabo Cecil Makgoba is the Archbishop of Cape Town and Metropolitan of the Anglican Church of Southern Africa.

He was born and spent his early years in Alexandra Township, Johannesburg, and then – after his family was forcibly removed – spent the rest of his childhood in Pimville, Soweto. After his schooling at Orlando High, he studied for a BSc at the University of the Witwatersrand, then trained as a priest at St. Paul’s College in Grahamstown, where he earned a Diploma in Theology.

After ordination, he served in various positions in Johannesburg Anglican Diocese, including at St Mary’s Cathedral and the Church of Christ the King in Sophiatown, and as Anglican chaplain at Wits. During this time he also graduated at Wits with a BA (Honours) in Applied Psychology and an MEd in Educational Psychology and lectured at Wits, in the Division of Specialised Education and at the Wits College of Education, where he was Dean of Knockando Residence.

He was elected Bishop Suffragan of Grahamstown in 2002 – serving as Bishop of Queenstown, then as Bishop of Grahamstown in 2004 and as Archbishop in 2008. He pioneered the concept of indaba in the worldwide Anglican Communion as a means of getting to grips with difference, and was decorated by the Archbishop of Canterbury with the Cross of St Augustine for his role in the Communion. He currently chairs the Anglican Communion Environmental

Network. He has and continues to serve as a Board Member in a number of NGO’s and both Ecumenical and Interfaith Bodies.

Since moving to Cape Town, he has earned a PhD from the University of CapeTown, for a thesis on Spirituality in the South African Mining Workplace. He has also received degrees of Doctor of Divinity (honoris causa) from the General Theological Seminary in New York and from Huron University College in Canada, University of the South (Sewanne, Tennessee).

He has in recent years taught MBA students at the University of Cape Town on Ethical Leadership and Stewardship, and is also an Executive in Residence at the Wits Business School. He served as a commissioner for the Press Freedom Commission under Justice Pius Langa and has been a panellist and discussion leader at various World Economic Forum meetings in Davos. He is currently the Chancellor of the University of the Western Cape. He has published two books, a short autobiographical account, Connectedness, 2005 and Workplace Spirituality in a Mine Context, 2012.

He is married to Lungi Manona and they have two children, Nyakallo and Paballo. He loves walking, nature and reading.