New king to feature in Hall of Kings 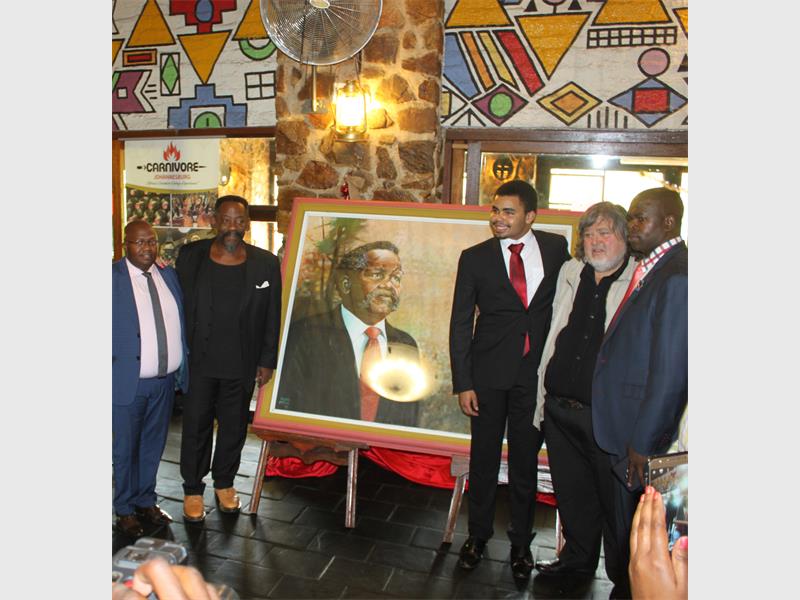 07 Dec New king to feature in Hall of Kings

This year marks the 100th year since a South African icon, Oliver Reginald Tambo, a stalwart of the South African liberation struggle, was born.

The Carnivore Restaurant in Muldersdrift hosted the long-awaited unveiling of an OR Tambo painting in celebration of both his 100th birthday, and the restaurant’s 25th birthday.

To commemorate OR Tambo and his efforts, and to celebrate 25 years of existence in South Africa, the Carnivore commissioned artist Sue Orpen – an artist based in Muldersdrift – to paint a portrait of OR Tambo that will be displayed in the Hall of Kings at the restaurant.

The event, which took place on Monday, 27 November, was attended by many dignitaries including the Executive Mayor of the West Rand, Boyce Maneli, as well as the guest of honour, Dali Tambo (the late OR Tambo’s son), among many others.

The Executive Chairman of the Recreation Africa Group and owner of Carnivore, Robert Forsyth, opened the proceedings by sharing the history of the group, from its origins in Kenya to the establishment of the restaurant in Johannesburg. He also highlighted the passion the Recreation Africa group has for African history and heritage.

Dali Tambo also gave a moving message about his father, who apart from his passion for liberation and inclusivity also had a passion for heritage and culture. The commissioning of the painting and its inclusion into the Hall of Kings was therefore a welcome development. He humbly thanked the artist and highlighted how she had managed to portray his late father in a dignified manner.

Guests were intrigued by the sight of Dali’s 19-year-old son, Oliver Tambo assisting his father and Robert to unveil his grandfather’s painting. After the formalities concluded, the guests enjoyed a ‘Beast of a Feast’ at the restaurant.

Do you perhaps have more information pertaining to this story? Email us at krugersdorpnews@caxton.co.za or phone us on 011 955 1130.