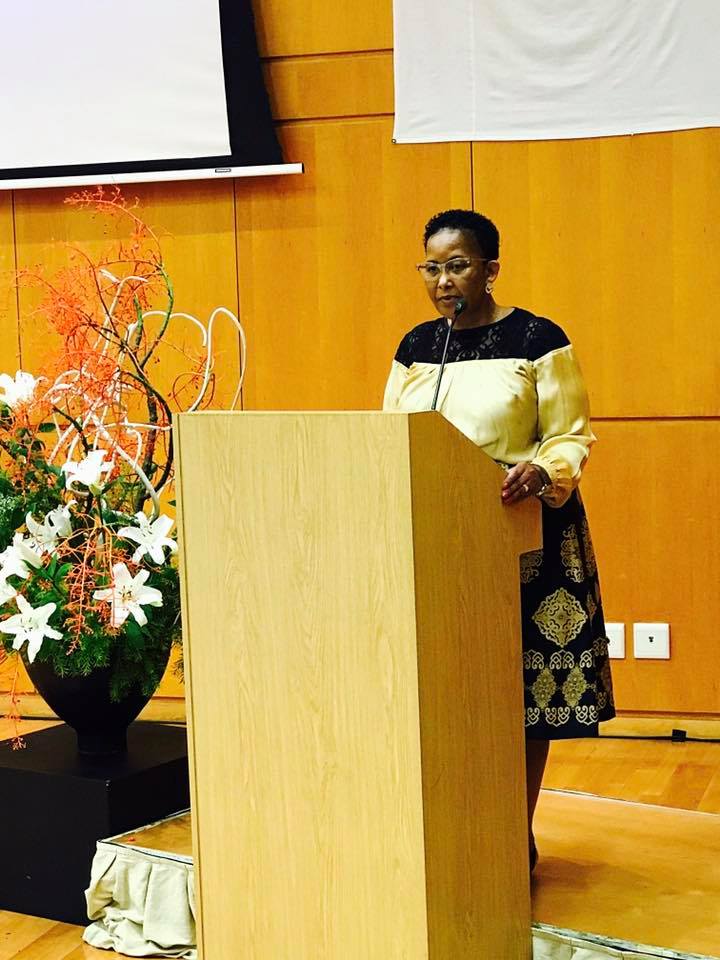 JAPAN: CONGRATULATORY REMARKS BY MS TOKOZILE XASA, MINISTER OF TOURISM, ON THE OCCASION OF JAPAN’S NATIONAL DAY CELEBRATIONS THAT IS TO BE HELD AT THE JAPANESE EMBASSY IN GROENKLOOF, PRETORIA,

Excellencies and other Members of the Diplomatic Community

Representatives from Government, Business and Labour

On behalf of the Government and the People of the Republic of South Africa, I wish to extend our congratulations today to the Government and the People of Japan on the occasion of the celebration of your National Day. May I also convey South Africa’s special congratulations and best wishes to His Majesty, Emperor Akihito of Japan, on his 84th birthday on 23 December. And while I am on the subject of extending good wishes, it would also be appropriate for me to congratulate Prime Minister Abe on his recent successful re-election as political leader of the Japanese nation.

As we mark 100 years this year since the birth of OR Tambo, the former President of the African National Congress and one of the founding fathers of South Africa’s liberation and constitutional democracy, we also recall the fact that, over a century ago, South Africa and Japan already had established bilateral relations. These initial ties were forged when Japan appointed Sir Julius Jeppe as its first Honorary Consul to South Africa. Today, one 100 years later, the global political, economic and social landscape has changed dramatically, but the realisation of the importance of close friendships and strong global partnerships, has never changed.

Since 1994, the bilateral relationship between South Africa and Japan has grown exponentially over a wide range of areas of cooperation, to the extent that in 2010, at a political level, a decision was taken to upgrade the diplomatic ties to a strategic cooperation partnership. In terms of trade and investment, the relations blossomed over the years, with a very optimistic outlook currently. Not only did South Africa enjoy a trade surplus with Japan over the past few years, but we also experienced several new, major Japanese investments into the South African economy. This was especially evident following the visit to Japan in August 2015 by Deputy President Cyril Ramaphosa, and the subsequent visit by Keidanren to our shores in 2016.

The economic sectors which benefited most from this impetus, inter alia, are key industries which complement our National Development Plan, such as energy production, water supply, the automotive sector, mineral resource beneficiation, finance and ICT. Last year, the total bilateral trade between South Africa and Japan stood at R88,3 billion, although both sides are confident that there is sufficient scope for even stronger trade.

As far as the current footprint of Japanese businesses in South Africa is concerned, there are over 140 Japanese companies with large investments in South Africa, which sustain approximately 150,000 local jobs and which contribute substantially to the transfer of skills and technologies to our country.

For this state of affairs, South Africa is very appreciative of the keen involvement of the Japanese business community in our economy, including through technical cooperation institutions such as the Japan International Development Agency (JICA).

In addition to the above, Japan remains committed to the development of the African continent via the TICAD initiative, from which South Africa stands to gain substantially. Within this context, President Jacob Zuma and Minister Maite Nkoana-Mashabane recently had fruitful discussions with Foreign Minister Taro Kono on the margins of the TICAD Ministerial Meeting in Maputo and have inter alia reaffirmed their joint commitment to enhanced multilateral cooperation, to the mutual benefit of both countries, as well as the Continent.

The South Africa – Japan story has many highlights, but it would be incomplete without referring to the critical role that Japan is playing in terms of its support to bilateral scientific cooperation initiatives and providing access for many South Africans to technical skills development opportunities. As a teacher, originally, OR Tambo wanted to see good, quality education in South Africa, especially for the disadvantaged. Japan’s acknowledgment of this dire need in order to contribute to the long term economic, social and industrial development of South Africa, is clearly demonstrated in most of Japan’s technical cooperation initiatives.

Japan, undoubtedly, is a reliable, strategic partner of South Africa, especially in terms of mitigating the effects of our triple challenge of inequality, poverty and continuous high levels of unemployment.

The relationship, however, is based on mutual benefit, whether in terms of exchanging technological know-how, or access to vast mineral resources and human capital. In this regard, South Africa will always play its part in strengthening the bond of friendship with Japan, which already spans more than 100 years.

In conclusion, ladies and gentlemen

Both South Africa and Japan are keen on elevating our bilateral ties to even greater heights. Thank you for allowing me to participate in the celebrations today, as we listened to achievements of the past, and look forward to many more joint targets in future! May I wish Your Excellency good health and reaffirm South Africa’s commitment to continued cooperation and friendship.

Speech provided to us by the Department of Transport