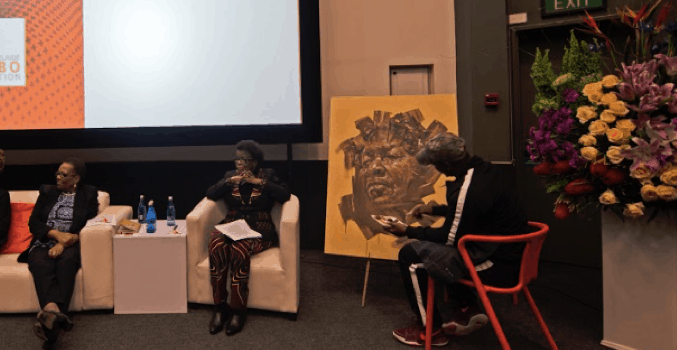 The event was opened by UJ’s Deputy Vice-Chancellor Academic, Professor Angina Parekh, which was followed by the UJ Female Vocal Ensemble performing a musical tribute to MaSisulu.

We had hoped to include women (or their descendants) in the audience who either helped organise or attended the August 9th, 1956 women’s march. To this end, Ntsiki Sisulu-Singapi represented the Sisulu Family and shared lessons she’d learnt from her grandmother – the event’s honouree. She set the scene the scene for the dialogue and commented on the state of women’s emancipation in the country in 2018.

A panel discussion followed and took the form of a facilitated cross-generational dialogue, tackling women’s issues – both during MaSisulu’s time, and now. The event served as a platform to discuss the power women have, especially when they band together to effect change. The panel consisted of: Geraldine Fraser-Moleketi, Nomtuse Mbere, Thuto Thipe, Thandeka Gqubule and Thenjiwe Mtintso. It was facilitated by Sithembile Mbete, who managed to withdraw enticing anecdotes from the panel and strongly encouraged participation from the (cross-generational). The panel shared lessons learnt from their own journeys and provided interesting correlations between the women of 9 August 1956 and women today. They drew on their memories of MaSisulu and other role models. Conversations on pragmatic ways forward on how to harness the immense power of women took centre stage.

Geraldine Fraser-Moleketi called for a women’s movement to ensure that South Africa develops a strong feminist movement in honour of Albertina Sisulu, pointing out the need for far-reaching changes in gender parity. “We as women can yoke the energy of Ma Sisulu and channel that into solutions to the challenges of 2018 and beyond,” said Ms Fraser-Moleketi. The former minister compelled women to take their rightful place in across all levels of leadership.

The panel discussed MaSisulu’s setting up of an underground network of the ANC across the country to ensure the it was kept alive – in an age without social media and telephones. They emphatically dispelled the myth that women could only be caregivers, because the anti-apartheid movement showed the undeniable role women played.

The question was posed: What can we learn in terms of mobilisation and organisation? The panel answered that there was an urgent need for a vibrant, dynamic, strong women’s movement, across urban and rural, civic and religious, professional and otherwise sectors of society. Not a narrow social media movement, but the building of vast, far-reaching local, social structures which could use technology to leapfrog the movement forward and reach wider audiences in combatting gender-based violence, and the lack of women in leadership in boardrooms, on factory floors and in politics.

148 people confirmed their attendance, and 92 attended. Many attendees donated sanitary towels as an ‘entrance fee’. These will be donated to the Nkantolo Education Project.

The event showcased women as much as was possible. For example, most of the service providers were women, and all performances and/or artistic works were done by women, with the only exception being Vusi Mbulali, the Tambo portraitist, painting a portrait of MaSisulu during the event.

Following a final performance by the female vocal ensemble, the vote of thanks was delivered by the Foundation’s Projects Manager, Natasha Allie, and was followed by closing remarks by UJ’s Vice-Dean of Humanities, and the event’s main sponsor, Prof Kamscilla Naidoo. The evening ended with a cocktail dinner and networking session.